Consequently, Pal-Think for Strategic Studies organized on 22nd June 2011 a seminar entitled ” visions to support the reconciliation” as an activity in the project “Restoring Cooperation Amongst Community Actors towards Reconciled and Civilized Society” funded by the Swiss government. In the seminar, Palestinian academics and civil society activists called for holding  a public conference that includes different political spectrums, and practicing public pressure again.

The seminar aimed to discuss and offer legal, political, media and social visions to support the reconciliation, interim government and elections. The steering committee included the Palestinian Bar Association, Al Aqsa university and the university of Palestine. Although the seminar was held within the project “Restoring Cooperation Amongst Community Actors towards Reconciled and Civilized Society” funded by the Swiss government, the views in this report represent solely the researchers’ views and it does not necessarily reflect the view of Pal-Think for Strategic Studies or the Swiss government.

Summary:
Omar Shaban, head of pal think for strategic studies, asserted that the public state in Gaza strip is positive and the social impacts of the reconciliation emerge on the ground. However, this change may come to nothing if the leaders insist to postpone the practical steps of reconciliation. He added that the Arab and Egyptian positions currently play an effective role to bring the views of the Palestinian parties closer.

Khaled Safi,  professor of modern history, reviewed the challenges, obstacles and potential scenarios of the reconciliation. The Arab, regional and international interventions have a great effect on the future of reconciliation, Safi said. Not to  mention the Israeli policies whether by halting tax transfers or using peace agreement with the Palestinian side to obstruct forming any government may include Hamas members. As regards to the basics elements for successful reconciliation, he highlighted the necessity to continue the public pressure, and provide  media, political and finance support to confront any Israeli or American’s threat. ” we should create a social culture which reinforce political and social democracy, and renounce violence, hatred and fanaticism”, he added “…   the more likely scenario for reconciliation is not to abide by the timed agenda the matter which requires new public pressure and mediations from time to time”.

Salama Bseeso, vice- Chairman of Palestinian Bar Association, denoted to some visions to support reconciliation on the legal level. He highlighted the necessity for holding a public reconciliation conference that includes whoever suffered damage or loss during the internal fighting in 2007. He called for fair and independent judiciary through passing verdict and laws to rectify the laws passed through the previous four years. In respect to the interim government, Bseeso called for forming an independent legal committee to observe the interim government, activating elections law, and determining a date to carry the elections out.

Hussein Abu Shanab, dean of faculty of media and communication- University of Palestine, said that media is the supreme authority in the society for it formulates the standards of success or failure. He called all parties to get rid of the foreign interventions, hatred, incitement and nepotism through a good faith, will and absence of foreign interventions. He called for forming a supreme media council which includes professional, experienced and responsible figures.

Challenges and Political Visions to Support Reconciliation
Dr. Khaled Safi,  professor of modern history- Al Aqsa University
The reconciliation is not pure Palestinian issue since the Palestinian parties are connected politically and financially with powers in the region. The Palestinian authority is bound by  financial, political and security agreements with the Israeli side. On the other hand, the leadership in Gaza Strip is connected with other Arab and regional powers. Therefore, there are subjective and objective obstacles and challenges that confront achieving the reconciliation on the ground.

Subjective (internal) challenges:
– Some figures in both Hamas and Fatah party hinder reconciliation for self interests. As those figures occupied important military and security position during the division, they now enjoy privileges and influences that they will never leave.
– There is no agreement on the political agenda among the same party. As there are groups who support the Islamic project and others support the national project. Some support negotiations and others support resistance.
– The Palestinian internal decision is not independent because of political and financial independency.
– The separation between Gaza strip and west bank the fact which weakens the political, social and public connection and communication between Gaza strip and West Bank.
– The fragile culture of democracy, the dominance of fanaticism and rejection of the others.

Factors of successful reconciliation:
– Both parties should recognize the significant of reconciliation for local, regional and international factors.
– Both parties should recognize the obstacles of reconciliation, confront them and turning the intentions into facts.
– Continuous public pressure.
– Supporting the unity government to achieve its program on all levels.
– Providing political, media and financial Arab support to confront any threat of stopping the American and foreign support.
– Providing regional support such as Turkey which had good relations with both Israel and Hamas.
– Launching diplomatic and media campaign to propagate the significant of reconciliation.
– Creating new social culture which reinforces democracy, freedom, tolerance and acceptance of the other.

The expected scenarios for reconciliation:
– The failure of talks and keeping the status quo in which each party accuses the other of being responsible for this failure.
– Postponing the reconciliation and not to abide by the timed agenda the matter which requires new public pressure and mediations from time to time.
– The success of reconciliation pursuant to the agreed upon timed agenda.

The Role of Media in Supporting Reconciliation
Dr. Hussein Abu Shanab, Dean of faculty of media and communication- University of Palestine
No doubt media has become the first and supreme authority in the society for it plays a big role in formulating the standards of success and failure. Therefore, it become necessity for media to play it’s role in supporting one of the national purposes which is reconciliation. The following are methods, obstacles, requirements, and proposals to support the Palestinian reconciliation.

Fundamentals and principles to achieve reconciliation:
– Promoting the freedom of speech
– Promoting democracy
– Activating civil society organizations and save them from control and corruption
– Developing the relations the intellectuals and politicians
– Protecting pubic institutions and properties
– Protecting media, journalism, journalists , academics and intellectuals.
– Creating and founding fair law and judiciary
– Reinforcing and deepening productive dialogue between the political and cultural civil society organizations the state which paves the way for the construction and development of the future state.
– Reinforce productive dialogue among the journalists themselves to create a transparent, honest and clear media message.
– Getting rid of the foreign interventions
– Putting social, political , intellectual gentlemen’s agreement which all parties shall be abide by.

The obstacles that impede achieving the reconciliation:
– The absence of trust
– The vagueness of media message
– Incitement and provocative TV programs and shows
– Fanaticism
– Fanatic spokespersons
– The foreign backed media
– Restricting freedom of speech and chasing opponents
– Forcing reporters to use specific terms
– Absence of qualified and mature media authority

The requirements of successful media role in reconciliation:
– Remove the aforementioned obstacles
– Forming a supreme media council of concerned, qualified, experienced and professional figures.
– Reconsidering the current media policy and guiding it a way from any partisanship.
– Reconsidering the factions’ media and controlling it.
– Identifying information sources and clearing them.
– Establishing media training centers upon a clear policy run by concerned and qualified people.
– Putting gentlemen’s agreement that bide all parties and people upon the laws in force.
– Reconsidering and developing press law.
– Removing the terms and expressions which instigate division and replace them with terms and expressions of positive values.

A proposal to create and support a media program that support and fortify reconciliation:
– Forming qualified, independent and specialized committee in the field of media , politics. The committee should be able to communicate, cooperate with all parties and people away from fanaticism and factionalism.

Legal Visions to Support Reconciliation, Interim Government and Elections
Mr. Salama Bseeso, vice- Chairman of Palestinian Bar Association
The four-year rift have left harmful impacts on the social and legal status, particularly, the work of the Palestinian courts. Therefore, efforts should be exerted to guarantee the fairness and independency of judiciary, and pass laws and verdicts to rectify the laws and rulings passed through the last four years.
The following is visions and ideas summarize in brief how to support the reconciliation, interim government and elections.

Visions to support reconciliation:
– To hold public reconciliation conference includes all those who get harmed by the internal fighting in 2007.
– To pay Diyah* (Reconciliation in blood money) to the killed’s family in order to start a new phase of peace and tolerance.
– To reactivate the role of the legislative council in regards of passing new verdicts, laws, and legal procedures.
– To settle an account with whoever involved in illegal works and made use of people and others’ properties.

Visions to support the interim government:
– To organize meetings and workshops which gather all the legal authorities and departments such as the public prosecution, judiciary and the ministry of justice in order to agree upon plans and terms that support reconciliation.
– To establish cooperation between Palestine Bar association and civil society organizations as this cooperation represents legal power to protect reconciliation and raise the awareness of the people regarding the legal issues.
– To provide the interim government with distinguished legal stuff to enable the government to solve the legal problems and achieve a concrete justice.
– To form an independent legal committee to monitor and observe the interim government and its commitment and implementation of laws and constitution.
– To allow the civil society organizations participate and share the aforementioned committee in putting and drawing plans and mechanisms to facilitate the work of the interim government.
– To put gentlemen’s agreement that includes all the Palestinian factions to guarantee their support to the government.

Visions to support the elections:
– To activate the general elections law through putting basics and visions to guarantee a fair elections, and immediately determine a date for carrying out the presidential and parliamentary elections.
– To call the president Mahmoud Abass to issue his orders toward facilitating the process of elections and order the election committee to start its legal role to prepare for the elections.
– To call all factions and parties to work honestly and seriously to avoid any sectarian or factionalism crisis  which may affect elections negatively.

Recommendations:
The seminar witnessed a productive and fruitful debates. The discussion ranged and there were many interpositions that enriched the theme of the seminar. The seminar came out with:
– Holding a public conference that includes all the political groups and parties to put pressure on the leaders and support reconciliation.
– Gathering the efforts of all institutions and individuals, and working on turning them into tangible products.
– Reinforcing positive values like the acceptance of the other, tolerance and mutual trust.
– Searching for an alternative to the American financial support to free from the American hegemony on the Palestinian decision.
– Practicing new public pressure on the leadership.

Sport Accord is a Step to Achieve the Palestinian Reconciliation

The Role of the Working Class in the Palestinian National Reconciliation

Pal-Think Concludes its Training Program in Ramallah and Gaza City

Empowering The Role of Community In The National Reconciliation

Sport Accord is a Step to Achieve the Palestinian Reconciliation

The Role of the Working Class in the Palestinian National Reconciliation

Pal-Think Concludes its Training Program in Ramallah and Gaza City

Empowering The Role of Community In The National Reconciliation 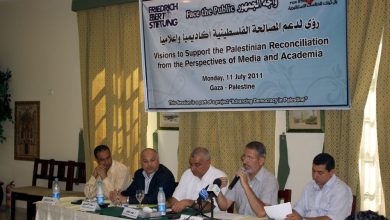 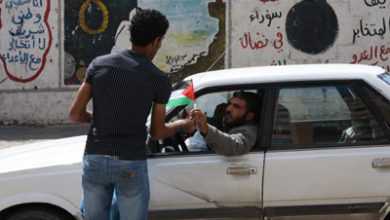 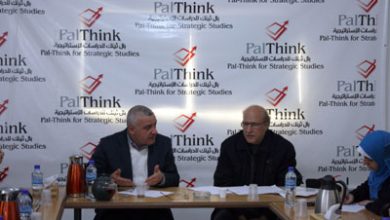 Where Does the PA Stand these days? Neither Dismantling The PA Nor The Resignation of President Abbass is Considered! 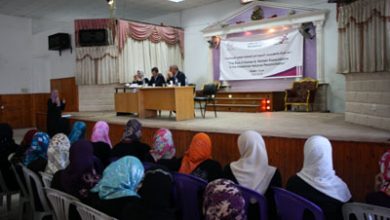